Date: March 2022
Version: 0.14 Patreon Version
Language: Eng and Rus
Censored: no
Succubus Contract – This is a linear visual novel based on RenPy
MC is a young boy who has just recently turned 18 years old. One perfectly ordinary day, he and his best friend, Tom, head to a club where they intend to relax, unwind and meet girls. At the club, MC meets a seemingly inconspicuous girl. They have a drink and have a nice chat, after which their conversation develops into something more. Our hero has no idea that this girl is actually a succubus. He thought that tonight he would have a hot night with this beauty, so he agreed to do anything to get her into bed, the succubus was counting on it. Looking the hero in the eye, she offered her terms, to which the MC immediately agreed, as he didn’t think there could be any hidden meaning in her words. After sealing the contract with a passionate kiss, the succubus walked out into the darkness of the nightclub. After that, the most ordinary day turns into the most mystical day of our hero’s life. In the morning he wakes up and realizes that his male body has turned into a female one. From that moment on his adventure begins, full of a whole new experience.

Gameplay
You play as a guy who turns into a girl. As the story progresses, you will learn new details about his contract. But be careful with your choices, you may miss out on some characters who know a lot more about the succubus contract than the MC.

And also, with your choices, you can control all the sexual content in the game (not counting the plot-driven scenes). Thus adjusting the entire gameplay to your own preferences.

In this update, MC’s adventures in the club continue and she can return home leaving Averia alone.

Or… Join her and come home where she can continue their fun. And on top of all this adventure, MC will once again enter the realm of dreams, where new and unusual challenges and interesting acquaintances await her. 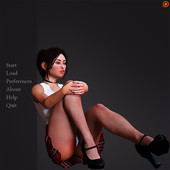