Overview:
You lost your duties as a butler due to the incident at The Dragon’s Castle, but now that you own a ship and can explore the Sky Realm unhinged, you have decided to become a hunter. You’ve heard that various islands of the Sky Realm have mysterious species that are highly priced as companions, professionals, and show pieces.”
Description one liner:A third person view game where you explore, sneak, hunt, and sexplore with your sky ship crew.​

NEW – Kizan full decoration pass – Map is now populated with locations to explore and find loot in + one special chest.
NEW – Kizan Dewseed Tribe – The kizan tribe’s small village can now be found in the jungle. There’s a new FxTF full act with one of the tribe members, and one of the tribe members is a trader with a small and quickly rotating stock of kizan clothes.
NEW – Kizan clothes set and loot – Added 4 kizan upper clothes, and 4 kizan lower clothes, and dozens of kizan (island or species) specific random loot you can find from chests around Kizan.
NEW – Skiia additional decorations pass – More things to see, more things to find on Skiia, and more decorations in Kirhaal, and also more chests to find.
NEW – Camping system – A simple camping system that allows you to sleep at various locations around the two islands as long as you have rations with you (certain traders have their stocks updated to include the item).
NEW – Additional Acts – This is a new option in the options menu, enabled by default, which adds new written acts for NPCs with reused animations. In this build K’nali has a M/FxM Additional Act, with unique writing but reusing Timathi’s unique act, Spirit also has an FxM Additional Act (r28b), and Inalya has an FxM Additional Act (r28b). In future it will be expanded to basically cover NPCs that normally would not get an act or to add additional acts to some NPCs who already have an unique act (e.g. characters like Spirit who has been a favorite of people).
NEW – MODDING – Custom Character Materials – It’s now possible to make custom character materials, with full support for smoothness/metalness/emission and such (this is how full character materials are done). It is also possible to make “detail” layers on existing materials (this is how Spirit and Horveek are done for example). Note: This currently cannot be used in character creator, but rather on existing or new NPCs/playable characters.
NEW – MODDING – Custom Traders – It’s now possible to make a trader definition with mods for an NPC and add custom stock they’re selling.
NEW – MODDING – Custom Spawners – It’s now possible to make custom spawners and add them into the world.
NEW – MODDING – Custom Items – It’s now possible to create new custom items with custom art (inventory items), and also to define new custom colors for existing clothes (e.g. to create pink captain’s jacket).
(r28b) Improved some reward options for Inalya based on other skills of player.
(r28b) Improved bug reporting tool to also submit error log at the same time.
Improved information conveyed to player about certain clothing types blocking other types of clothing (namely kizan clothes blocking full upper body clothes, but still allowing upper chest clothes like bras)
Improved wording on exit to give more detail to player on autosaving.
Improved wording on Kess’ Howler rumor to guide player towards the right thing instead of the doggos to hunt.
Improved wording on Bosun to suggest player about shore “teleporters”.
Improved Kizan grass by batching them into groups like on Skiia.
Improved resolution of grass textures to make them sharper.
Improved effect of Yule mask.
(r28b) Fixed problem with inverted nipples (primarily on engineer upper cloth) after loading game with clothes on and removing them.
(r28b) Fixed some Kess’ reactions to player’s breasts triggering wrong.
Fixed prey items disappearing after reloading the game.
Fixed Wikk’s pad description talking about Taev’s pad.
Fixed Skiir’s Wrath effect’s performance.
Fixed some softbody areas influencing other areas (e.g. breast softbody areas influencing stomach softbody that was disabled)
Fixed head clothing not working properly for followers in acts.
Fixed builtin character saves not appearing properly.
Fixed some furs allowed with sailor pants.
Fixed jingle object sound batching and sensitivity.
Fixed floating collar on Skiia.
Fixed LOD culling issues with Lone Rise ramp fences, bridges, and rocks. 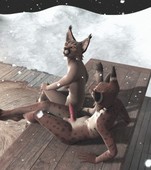