Date: 18.04.2019
Language: English
Version: 0.25
Censored: No
For some time now, things were going really bad for a young teacher Roxy.
All because of her bad reputation.
Being a futanari with a strong libido, she liked to take off the sexual tension using her young female students, but one day it all came out sideways when she had sex with the director’s daughter.
After that, all she could do is pack her things and get away from there before it was too late.
But after a while by the greatest piece of good luck, she suddenly got a call from an elite agency and she was offered a specific job.
Ah, if you only knew how happy she was when she found out she would work at the private camp for girls from very rich and powerful families. Her goal is to get the girls ready for adulthood and sexuality and to make the three richest girls pregnant with her child.
What could be easier than this wonderful task?
As it turns out, there are internal rules of the camp which will greatly complicate her life and make the task not that simple.​

Growing Up New version from Nirolf 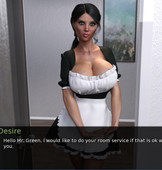 Lifeselector – A day with Dillion