Info: We aim to create an RPG Maker title similar to Ahrimans “The moral sword of Asagi”, just with Ferania and our other characters from Deathblight.
Our plan is to start with Ferania and Minori as the main playable characters at first, but gradually expanding and including new characters in the future.
The setting of the game will be in a more modern world, similar to our world.

Throughout the game, our main characters will be trying to free a city which has fallen into the hands of the demons. They’ll need to clear out several demon dens and beat several bosses in order to do so.
As the story progresses, new party members will join and eventually you can select which characters to take on missions.
Also there will be some ways to earn ingame money and see hentai content at the same time.
This will include, among other things, prostitution and working at a maid café, bar or some other place.
We’re also planning to include a corruption system for the characters. Some of them will need to have a certain level of lewdness (corruption) before being able to participate in certain activities, otherwise they might just refuse.
There will of course be a way to raise or lower corruption levels (even completely get rid of them), for example via potions.

Please note that this is not a major release, it’s just a polished version of the previous one.

-> The bosses got new abilities! Watch out!

-> Slightly increased HP of both

-> Streetlights now light up at night

Spoilers for the bossfight:

Please don’t read this if you want to find out how to deal with the bossfight yourself.

He is immune to being stunned.

He can do insane amounts of damage with his special attack.

(Minori can debuff his damage greatly with Leg Sweep)

He can be stunned.

(Ferania can use Lightning Shock to stun him)

He does insane amounts of RST damage with his special ability.

Basically, if you take care of Duke with Ferania, and take care of Jacque with Minori, you should have a considerably easier time to deal with them.

More information on the bosses:

There is a 100% chance to stun Duke when he’s about to use his special ability.

Ryuuseiha is a powerful move of Minori, but when the bosses buff themselves up it’s pretty much useless against them.

Minori’s Sunburst is a great skill to use, but it’s not required to beat the bosses.

Also, if Ferania or Minori is hentai-grabbed, make sure to use the “Discipline” skill (Ferania) or “Rescue” skill (Minori) in the “…” category.

It will instantly rescue a character from being hentai-attacked, and thus prevents further damage. 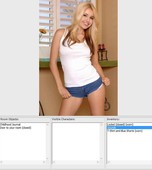 Verse For Girl from Asmina