Combat Changes:
General quality of life improvements to combat which ultimately creates a new ‘late game’ for combat. Previously combat end conditions were somewhat unclear and spontaneous. Combat now continues until the player is ready for it to end. Players have more options when they are losing or lost, and even after the fight as well.

The fleeing aspect has been improved, while under the hood system is unchanged, it’s build up is now visible and players can now see how close combatants are to escaping. Player Parties now follow the player out on flee attempts. Enemy fighting styles have been adapted and can attempt to flee as well.

Robots are now a bit different in combat, no longer requiring energy like the rest of us living souls. Players will discover they will need to use different strategies when fighting these mobs.

New Event:
Players can now discover enemies already partaking in sexual acts. While exploring alone, the requirement for sneaking up and watching is only [4] Smart, with an additional point required for each extra party member.

New Filter Options:
Very specific filter options which effect enemy spawns. –It does not yet filter the voyeur special event–
If all the mobs are disabled in a biome, a filler enemy “Dinki Di” will appear instead. There are no lewds associated with this mob. It’s more of a failsafe condition when all enemies are disabled. 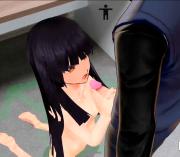 After School Girlfriend mobile game on Android by Nekuma