Date: 2020-09-19
Censored: No
Version: 0.2.33
OS: Windows, Online
Language: English
Overview:
Harry Panuchkin is a cliché kid from the suburbs – skinnier than the lamppost, whiter than bleached asshole, and a mouth full of gangsta rap trivia.
You can say he’s a moron with boring life, but just so happens that he’s on a verge of a great adventure.

This update took much longer then I thought, but I still plan to push out 2 quests in the next week. I’m on the roll, and want to finally start working on Daphne’s content again!

1. Changelogs.
So when my Patreon got wrecked, I started having huge problems communicating the updates to my Patreon supporters. In the end I decided that the best would be to move those updates to the game itself. So now you have a cool button in the sidebar, called “Changelog”. Click it and you’ll find information about latest content there!

2. Tracking last save game.
So now, when we have changelogs in the game, I thought about a cool feature – if you load an old save, the game will automatically show you a changelog and mark all the new content that appeared in the game since that save. Awesome, right?!

3. Locked content instead of Public/Early Access versions of the game.
I had a growing problem with the fact, that I had to maintain two versions of the game – Early Access for supporters, and the other one for Public. So I decided to simplify it – there will be just one version now, for everyone. But instead – not-supporters will find that some of the content in the game itself is locked. You can always see what exactly content is locked on the changelog list.

In the end, it will work more or less like it does now. But it gives a better experience for the user – for example I can roll out bugfixes quicker, and everyone will get them without the need to wait for next Public version.

4. Reorganized Fap Mode.
So there are two versions of Fap Mode now – Regular and Unlimited. The first one acts more or less as before (gives you better yields), but the other one also unlocks the locked Early Access content.
Same as before, you need the codes to activate it. The codes themselves didn’t change, and you can still find them in same spot on my SubscribeStar and Patreon accounts.

Minor changes
5. Automatically removing spaces from Fap Mode codes. A lot of people had problems that they copied the code with space and it didn’t work – now it will.
6. Patreon is back as a support option. Basically, I thought that now they’re ok with me, I can add a link to the game. BUT It’s still better to support me on SubscribeStar if you have an opportunity.

Bug fixes
7. Aphrodisiac is now available in the store. AGAIN. But now it works;)
8. Hundreds of small bugs in the popup and chunks macros, that I use to generate the content. 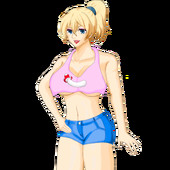 Waifu World version 0.1a by CoopNinjask