This is the 4th volume of LILITH-IZM! The theme is “tanned skin”!!
In addition to Lily who has originally brown skin, Asagi, Sakura, Murasaki, Isuka, Subaru and Sekka, all girls get a good tan in this product!

Taimanin Asagi Gaiden
Kunoichi girls get a brief rest. While Asagi, Sakura and Murasaki are relaxed on the beach, there are low-ranked devils that hold a twisted desire…

Tentacle and Witches Gaiden
The official story after Lily route! The main character reaches at a tropical island. Now, alone with the girl with a tanned skin on the beach, there’s only one thing to do! Choose a suitable cosplay for her and have fun with her!

Magical Girl Isca Gaiden
Isuka and Mitsuki went to a seaside school and got sunburned. There again, the clans from the hell followed after her.

Magical Girl Subaru Gaiden
Subaru and her 2 friends went for a bathe. There, Yuya met a girl with a mysterious atmosphere.

3D bonus game is also included.
This is a 3D real action game to tease the magical girl Subaru in a sexual way. Don’t give her nudges too much so that she won’t burst into crying. 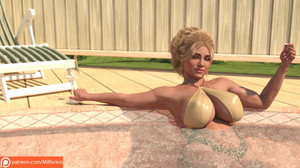